Battling the Storm … And Making It Through! 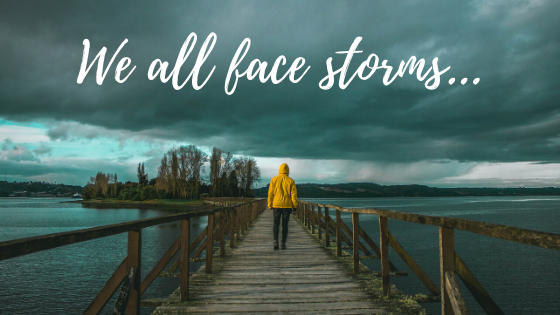 I’ve never shared this story before.

In fact, the idea of writing this right now is making me feel vulnerable AF.

On the heels of one of the most impactful nights of my life (if you missed the webinar last night, you REALLY need to catch the replay), it’s impossible not to reflect.

Taking a step back in time …

Two years ago, I was working for another company as a nutrition coach.

Unfortunately, that company was heading in a direction that I morally and fundamentally disagreed with.

I’ve been open about that before.

What I never mentioned was what transpired in the summer of 2018.

I sat in a room in Chino Hills, CA with Jason Phillips and approximately 20 other coaches.

I told Jason my situation and I told him that I didn’t feel right just pulling the carpet out from under my employer and leaving. However, I really disagreed with their methods.

I asked him if he thought it was a good idea for me to coach the way I wanted to coach and offer my employer a percentage.

Jason was floored for a second, which doesn’t happen to him often.

He said that he’d never heard of anyone offering that before, but he could tell I thought it was the right thing to do and he’s a believer in following your moral compass.

After a conversation with the owner, I was told that I could continue doing my neurotype training and coaching and remove myself from the automated system that they developed. We agreed on the details and percentages (I saved that email as a reminder).

Then, I got the call.

It was the “perfect storm”

I can’t remember the exact words, but it was something along the lines of … we can do this without you and keep 100%.

I’d like to say the conversation was civil but it wasn’t. I tried to keep my cool but I actually owned a small percentage of that company which was refused to be paid out.

Nah. I’m not about to do that.

I let them take back my percent of the company and I started my business.

To add a couple of layers to the story, I had just moved back from California to the east coast while going through a divorce.

Then, in June, my grandfather passed away.

He was my mentor and someone in my life that I really just wanted to make proud.

As many of you know, I named POP after him.

The reason I’m sharing this is because during that summer, I felt like every single thing was being taken from me.

I felt like each time I would absorb a giant uppercut, and feel ready to move forward, I’d get hit in the face with a left hook.

But, I never let it knock me out.

I knew I was serving something bigger than me.

And, if I was really going to make my grandfather proud, I had to stick to my values and do what I believed in.

So here we are … almost 2 years later.

Jason and I just did something last night that will fundamentally change the nutrition coaching space forever.

It’s hard to put into words what that feels like.

First of all, I’m so fuckin’ grateful that I decided to step into that room in Chino Hills and put my trust in Jason.

Doing things alone is hard. He says that I would’ve been successful regardless. Maybe he’s right. But man, his guidance and support has been invaluable (side note: get a coach … period.)

Second, whatever storm you’re going through right now … it’s temporary. Being in the storm sucks. There’s no way to sugar coat it.

No one wants to hear a positive spin on the shit storm they’re dealing with. So, I’ll spare you the “find the gift” bullshit.

Just know that it’s temporary. And, there’s no blueprint for getting through the storm. So show some grit. Be resilient. Scratch and claw your way through it.

There is. You’ll find the gift when you find your way out of the storm.

Thank you for being a part of something special and unique.

Thank you for believing in our mission, and thank you for showing up for yourself each day.

I’d still be in the storm if it wasn’t for you.

I love you.
MM