Here’s Why You Need Metabolic Priming 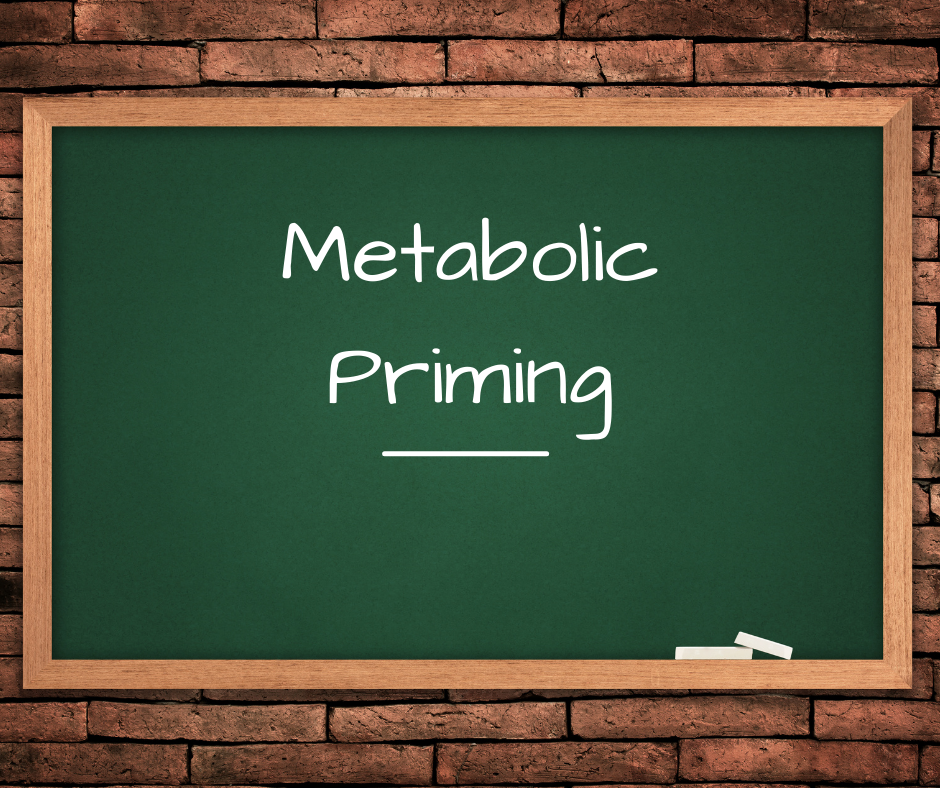 I remember finishing up a 6 week challenge where I got down to 9% body fat.

I couldn’t believe it.

I stepped on that InBody scanner and saw a single digit number for the first time ever.

I remember going into the bathroom at the gym and taking my shirt off to look in the mirror because I wanted to see what 9% looked like.

I picked myself apart for the next 10 minutes.

My conclusion: There’s no way that InBody machine is accurate.

My thought process: I need to get leaner.

Shortly after, I found myself on a road trip to Columbus, Ohio to attend The Arnold Classic.

I could tell you about the vendors, the strongman competitions, the bodybuilders, the bikini competitors …

But that’s all kind of a blur.

The only thing I could think about while I was there …

It was absolutely massive.

I ate my entire plate in about 90 seconds.

She barely ate half of hers …

So I finished hers too.

Let’s just say that entire trip was a display of epic over-indulging.

I had pulled the pendulum hard in one direction to get lean.

And it swung back harder in the opposite direction (as pendulums tend to do).

I remember driving home and eating bags of chips, candy, and any other shit food I felt like picking up at rest stops and gas stations.

I got home and felt sick.

And guess what the pendulum does after it swings forward really far?

It swings back even farther.

The next diet I tried was 4 protein shakes per day and a 500-700 calorie dinner.

Each shake was around 150-200 calories so you do the math as to how much I was eating.

I went to a friend’s house and ate more pizza and drank more beer than I’d care to admit.

The pendulum effect is something that we experience due to our mindset around dieting.

It’s the result of thinking that eating less is the solution.

Here’s the really fucked up part.

Once you decide to finally stop the madness … your body isn’t ready to respond.

After I stopped swinging from extreme to extreme …

I was finally doing everything “right” but nothing was working.

Your metabolism is a stress barometer.

Because that’s what your body does when it’s under constant stress.

Eating too little is a persistent stressor.

Chronic dieting is a major stressor on the metabolism (and a psychological stressor as well).

Preservation and survival are the most important things to your body.

So, your pursuit for body composition changes are irrelevant under those conditions.

Which is why I had no choice but to prime my metabolism before anything would change.

At the end of the day, if you’re not restoring homeostasis and allowing your body to feel safe …

You’re not going to progress.

But the challenge is …

We’ve been conditioned to under eat.

To always be dieting.

It’s baked into our culture.

Committing to the process of metabolic priming can be quite difficult.

It requires a total mindset shift.

It requires discomfort and doing things differently than you’ve done them before.

Now, it doesn’t mean you have to gain a bunch of weight in the process …

But it will stretch you, mentally and physically.

Do you think that years of chronic restriction are just going to be undone in the blink of an eye?

So, you have to be ready to commit to the process.

That’s where coaching is your greatest asset.

However, even with a coach, you still have to be willing.

No one is going to force you to do anything.

You have to WANT to change.

Your coach will guide you. Give you direction. Hold you accountable. Tell you what’s working and what needs to be changed …

But, neither is remaining stuck and frustrated.

So, I’m not sure the alternative is all that enticing.

Our clients that see the most sustainable and impactful changes, are the ones who commit, communicate, and follow through.

Doing this on your own is a massive undertaking.

If it was easy, you probably would’ve done it by now.

Then  shoot me a private message on FB.

Our 6 month, 1:1 coaching program starts with Neurotyping, moves to Metabolic Priming, and finishes with Lifestyle Integration.

Those 3 phases have consistently and predictably produced lifelong results for our clients when seemingly nothing worked for them.

If you want that for yourself …

You know what to do.