The Good, the Bad, and the Ugly of Fad Diets 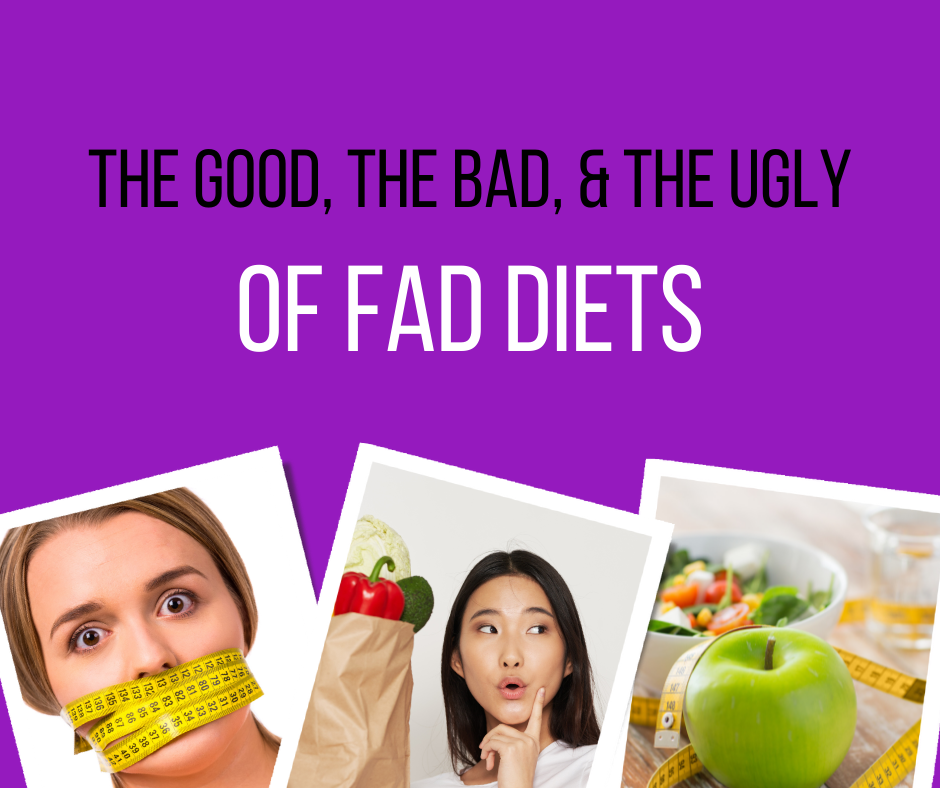 Have you ever played the game, MFK?

You pick 3 things and have to choose one to marry, one to fuck, and one to kill.

The one you marry, you can never sleep with.

The one you fuck, it’s a one and done situation.

It doesn’t have to be with people either.

Here, let’s do a quick round …

My reasoning is simple … I love coffee the most. And, even though I drink a protein shake almost every day, I think that Coke Zero slaps in that wam, bam, thank you maam kind of way. That first sip literally touches my soul.

Unfortunately, protein shakes have to die.

Which is sad because I also love tacos. But, that’s the point. This game isn’t supposed to be easy.

It kind of reminds me of the good, the bad, the ugly.

I was thinking about that recently as I’ve been reviewing a lot of nutrition plans lately.

We do this series every single week called “Fix My Diet” and we give away free assessments.

There’s a question on the assessment that asks about previous dieting history.

Anyway, I think sometimes we scoff at those fad diets that caused us to lose a bunch of weight and then gain back even more.

But, no one ever takes the time to explain why that happens.

The good, the bad, the ugly of some popular fad diets

I’m going to touch on what I consider to be the “Big 4” categories.

The good – can potentially help with getting in enough fats and protein (which many people under consume). Also can be a decent option for those with a significant amount of weight to lose who are sedentary.

The bad – pretty damn tough as a lifestyle. Not accommodating for real life or being social. Can a brother get a damn slice of pizza or some fuckin sushi please?

The ugly – can create some health issues, hormonal issues, and a poor neurotransmitter environment for many. Also can get ugly for anyone who is active since carbs are the preferred energy source of the body and brain. Not conducive to building muscle.

The good – can create some awareness around food choices. Some form of tracking / measuring can be helpful and informative.

The bad – still “grades” foods (Weight Watchers based on point allocation and Noom based on red, yellow, green foods). Good vs. bad thinking is directly connected to poor weight maintenance.

The ugly – often times too restrictive and doesn’t teach you anything long term. Noom claims to be psychologically driven and is anything but. Lots of false claims. Weight Watchers brags about customers coming back to them after they leave. Which simply illustrates that their clients don’t learn how to live a healthy lifestyle and become dependent on their point system. Noom also claims to be a lifestyle and then shills out 1200 calorie plans while grading food choices. Not a lifestyle.

The good – actually struggling to think of anything positive about these fad diets. Maybe you like the taste of their products??

The bad – replacing real food with overpriced chemicals. You want shakes and bars? Cool. You don’t need to spend $400/mo on them. If you want to invest that money, put it towards real coaching that teaches you sustainability. There is nothing healthy about relying on fake products instead of food. I don’t care what they claim is in their stuff.

The ugly – oh boy … so much ugly. Very low calorie. Completely unsustainable. Terrible for your metabolism. In the case of Optavia, they tell you not to strength train. Sometimes I think they actively want to wreck people and make them gain a ton of weight back. Because there’s zero logic behind their plans. 1,000 calories and no resistance training? Perfect recipe for a metabolic disaster.

The good – less cognitive load. You pick your meals and don’t have to think about what you’re eating.

The bad – zero accommodations for real life. You want a social life or to have family dinners? Sorry.

The ugly – teaches you nothing about how to make proper food choices or instill healthy habits. Unsustainable. Take the time to learn how to fish instead of buying a fish.

Ultimately, there’s a pretty simple way to determine if the results are going to last or if they’ll be short-lived.

Ask yourself … “Am I WILLING to do this forever?”

The problem with getting results on a program that you can’t sustain, is that you’re marrying that program.

What you do to attain it, is what you’ll need to do to sustain it.

So, when you start dropping fat one of these fad diets, you’re choosing to marry that diet.

If you aren’t ready to commit to that diet forever, then kill that motherfucker!

MFK … Marry the way of eating you can live with forever. Fuck the short term intervention that may be necessary for you (like a one time elimination to determine food sensitivities). Kill everything else.

This is the core reason why POP coaching is so damn effective.

No longer is it a matter of IF this will work.

And the when is determined by you.

Once you’re ready to make a real change and commit …

Then it’s game on.